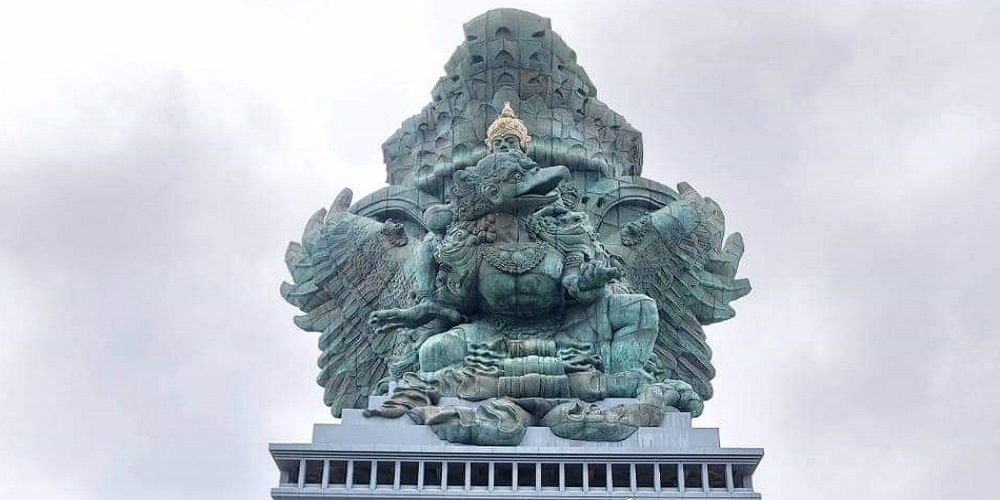 Bali Garuda Wisnu Kencana (GWK) Bali is located in the southern Badung area about 20 minutes from Kuta. That's very easy to access it from the Ngurah Rai Airport and hotels in Nusa Dua. Garuda Wisnu Kencana (GWK) Bali cultural park is located in the hills of limestone and rock, exactly over the hill of Nusa Dua Pecatu-Badung regency that about 40 kilometers south of Denpasar City Bali, it was approximately 30 minutes drive from Ngurah Rai when using a motor vehicle. 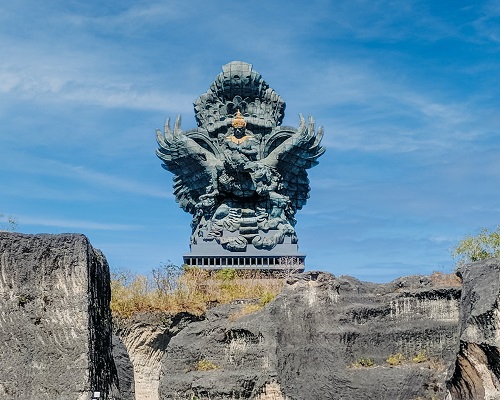 Bali Garuda Wisnu Kencana Cultural Park is an area with 240 hectares of land. There are Supporting facilities that you can enjoy like Lotus Pond, Festival Park, Amphitheater, Street Theater, Exhibition Hall, and Jendela Bali The Panoramic Resto and souvenir shop as well. There are many cultural performances every day at GWK. Barong Dance Performance is the most popular show in there and also performances of traditional Balinese music.
Various uniqueness and beauty of Bali are well in view of the history, traditions, cultural customs, arts and panorama attraction. Of many attractions in Bali one of them is Garuda Wisnu Kencana that abbreviated. Garuda Wisnu Kencana (GWK) Bali cultural park is the window of island arts and culture against the backdrop of nature and an amazing panorama, making one of the main objectives for a variety of performing arts, exhibitions, conferences or religious visits.

Here is the story of Garuda Wisnu Kencana which follow the birth and deeds of the mythical bird Garudaas quoted from Wikipedia. You can find this story carved into stone relief, placed in GWK Street Theater.

The story of Garuda birth and deeds is told in the first book of the great epic Mahabharata. According to the epic, when Garuda first burst forth from his egg, he appeared as a raging inferno equal to the cosmic conflagration that consumes the world at the end of every age. Frightened, the gods begged him for mercy. Garuda, hearing their plea, reduced himself in size and energy.
Garuda father was the creator-rishi Kasyapa. His mother was Vinata, whose sister was Kadru, the mother of serpents. One day, Vinata entered into and lost a foolish bet, as a result of which she became enslaved to her sister.
Mahabharata mentions about a bet between sisters and wives of Kashyapa, Vinata and Kadru, about the colour of Uchchaihshravas tail. While Vinata, the mother of Garuda and Aruna, said it was white, Kadru said it was black. The loser would have to serve as a servant of the winner. Kadru told her sons, Naga (“serpent”), to cover the tail of the horse and thus make it appear as black in colour and thus, Kadru won.
Resolving to release his mother from this state of bondage, Garuda approached the serpents and asked them what it would take to purchase her freedom. Their reply was that Garuda would have to bring them the elixir of immortality, also called amrita. It was a tall order. The amrita at that time found itself in the possession of the gods, who guarded it jealously, since it was the source of their immortality. They had ringed the elixir with a massive fire that covered the sky. They had blocked the way to the elixir with a fierce mechanical contraption of sharp rotating blades. And finally, they had stationed two gigantic poisonous snakes next to the elixir as deadly guardians.
Undaunted, Garuda hastened toward the abode of the gods intent on robbing them of their treasure. Knowing of his design, the gods met him in full battle-array. Garuda, however, defeated the entire host and scattered them in all directions. Taking the water of many rivers into his mouth, he extinguished the protective fire the gods had thrown up. Reducing his size, he crept past the rotating blades of their murderous machine. And finally, he mangled the two gigantic serpents they had posted as guards. Taking the elixir into his mouth without swallowing it, he launched again into the air and headed toward the eagerly waiting serpents.
En route, he encountered Vishnu. Rather than fight, the two exchanged promises. Vishnu promised Garuda the gift of immortality even without drinking from the elixir, and Garuda promised to become Vishnu mount.
Flying onward, he met Indra the god of the sky. Another exchange of promises occurred. Garuda promised that once he had delivered the elixir, thus fulfilling the request of the serpents, he would make it possible for Indra to regain possession of the elixir and to take it back to the gods. Indra in turn promised Garuda the serpents as food.
At long last, Garuda alighted in front of the waiting serpents. Placing the elixir on the grass, and thereby liberating his mother Vinata from her servitude, he urged the serpents to perform their religious ablutions before consuming it. As they hurried off to do so, Indra swooped in to make off with the elixir.
From that day onward, Garuda was the ally of the gods and the trusty mount of Vishnu, as well as the implacable enemy of snakes, upon whom he preyed at every opportunity.

This area is the first real rock and steep sloping then transformed into the beautiful and amazing with charming architecture. Implementation of the process by means Bukit cut into giant pillars like building in Egypt but still with the feel of Bali. From the Garuda Wisnu Kencana (GWK) Bali, we can see how beautiful Kuta Beach, Jimbaran, Bali's Ngurah Rai Airport and the Port of Benoa.

The area of Garuda Wisnu Kencana (GWK) Bali Cultural Park planned to be established a landmark or Bali mascot, in the form of a giant statue, that is a statue of Lord Vishnu riding a Garuda bird. This statue was projected to tie layout with visibility up to 20 km so that it can be seen from Kuta and Nusa Dua.

Garuda Wisnu Kencana Statue is a symbol of the mission of saving the environment and the world. The statue was made from a mixture of copper and steel weighing 4,000 tons with a height of 75 meters and a width of 60 meters, which was created by sculptor Bali, I Nyoman Nuarta, if manufacturing is complete, can match the Statue of Liberty in United States.

When entering Garuda Wisnu Kencana (GWK) Bali area you will be encountered several pieces of natural rock pillars wich high 25 feet are standing firm. Not far from Lord Vishnu statue, there is a sacred spring called Parahyangan Somaka Giri, why say sacred, because the water is coming out of the barren limestone hills. The water is believed to cure various diseases, also used as requirements to summon rain.