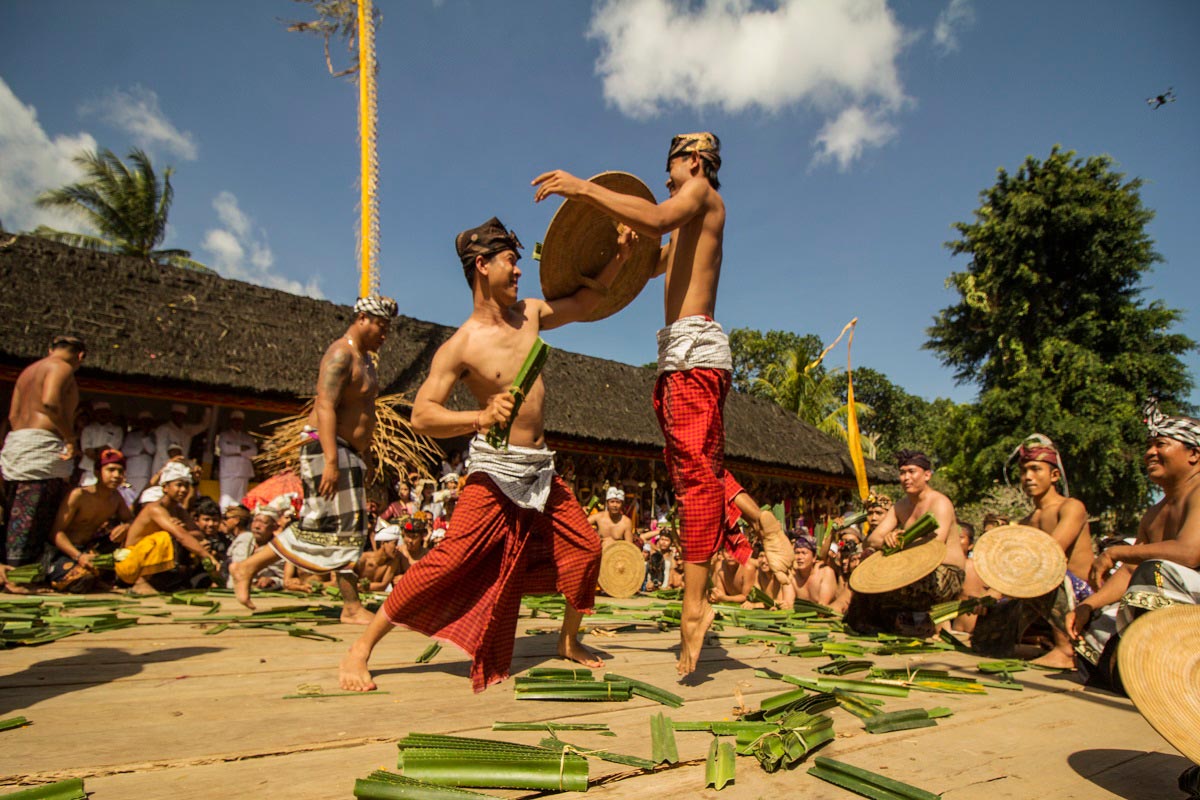 Bali Tenganan Perang Pandan is specific to Tenganan village only. The word " perang pandan" is a two words noun in Indonesian language, This war dance in Tenganan village is called " makare-karean " This event is carried out during the ceremony of the temple called " Ngusaba " It is strange because this kind of ceremony is also known by the rest of Balinese, especially those living on lowland with rice irrigation system called " Ngusaba Nini " The basic idea of this ceremony is to request a good rice harvest. At lowland area this ceremony is not a regular one, but it is decided by the village elders with ritual leaders in a plenary meeting. While in 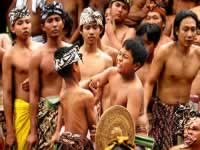 Perang Pandan is a regular ceremony based on Çaka year calendar and is organized in the village temple. While at lowland areas especially in Kabupaten Gianyar this is conducted for a ceremony called " Maleladan " ( a procession along the village main road toward the temple ). It is hard to understand who influenced whom in this case. Seeing from the name of the ceremony it must be an influence of lowland, since the rest of ceremonies and customary organization's terminologies

Tenganan is specific, and " Ngusaba " is belong to a mid-Balinese vocabulary ( ca. 14 to 16 century A.D.), an era when the Majapahit influence was becoming intensive. Çaka year is a lunar calendar created 78 years after Christian Era ( 78 Anno Domini ). Since this ceremony is based on Çaka year and Hindu-Java calendar, so it is hardly able to know the exact International Calendar date within which this ceremony will fall. We can only know the exact date around 6 months ahead of the date. While Hindu-Java calendar is consist of 210 days. Balinese use these two systems at the same time, and mixed it up. So you can find a ceremony coming every 210 days, and every 365 days.

Despite the fact that Bali Aga village has their uniqueness, but in common they share almost the same way of thinking. They consider religion, customs, arts, architecture, economy and other cultural aspects as the same entity and are involved in each of their creation and work. For example is the dance. Dance is considered as a ritual requirement, an amusement, and medium of education. While dance can be a performance from any kind of art, such as the idea of woman beauty, the warrior strength, prime minister wisdom, up to the animal behavior which interests the artist to imitate, and translate it into dance. No one doubt that Perang Pandan originally was a war dance or practice of self-defense which is also introduced by the rest of the world's ethnics in its different form and fashion. The only thing in Bali is that almost all dances are considered as the requirement of a ritual.

For makare-karean or perang pandan there is no rule of fighting, except the dance is given more to younger generation. The term " fighters " may more appropriate name to designate perang pandan instead of a dancer. The fighters bring in hand sharp edged pandanus leaves, while the other hand holds bamboo or rattan woven body shield to protect the body from the provocation of opponent. One person acts only as a referee. The fight resulted the scratch on the skin by thorny pandanus leaves and caused the bleeding. No one is safe from the scratch of the pandanus leaves after the fighting, the only smaller or wider scratches. After the fighting the ritual leader gives the scratch an oil made from herbal medicine, and spread holy water to the fighters. No heart feeling among fighters, and they all sit together to have meals on banana leaves.

There are some writing say perang pandan is related to the ceremony which is basically a scarification of blood. First of this, I really realize that this assumption might based on the wrong informant and wrong source. As you might have read that religion for Balinese is not a social institution, instead like water flowing to various soil, whenever it flows on red soil the color become red, and on a black soil it become black. So to know the real ideas we have to screen it in a minutes detail. It seems that in the past the religious leaders just left the religion flowing uncertainly, and developed according the local paradigm.

There is a ceremony in Bali using blood called " Tabuh Rah " but they used chicken blood or some time egg just as a symbol of underworld being ( a strong influence of ancient Buddhist left hand path ). The understanding of underworld was inspired by the animistic belief that this world is divided into 3 levels :

"Tabuh Rah" ceremony is offered for this netherworld which was at the beginning of Tantrayana sect of Buddhist in Bali the ritual was offered to the goddess of death. Since Tantrayana school in Indonesia and Bali also used blood as the symbol to provoke strength and power to their opponent and enemies. But this is merely symbol, and it is not specifically mentions that is human blood.