Bali Ogoh-Ogoh is very identical with Nyepi Day in Bali. It can be said that ogoh ogoh is the most interesting event among the series of Nyepi Ceremony. Ogoh ogoh are paraded in the Pengrupukan night, which is a day before the Saka New Year or so called Nyepi Day. Ogoh-ogoh whose appearance is very scary is usually paraded around the village or town by the Banjar or traditional village society which is dominated by the youth. 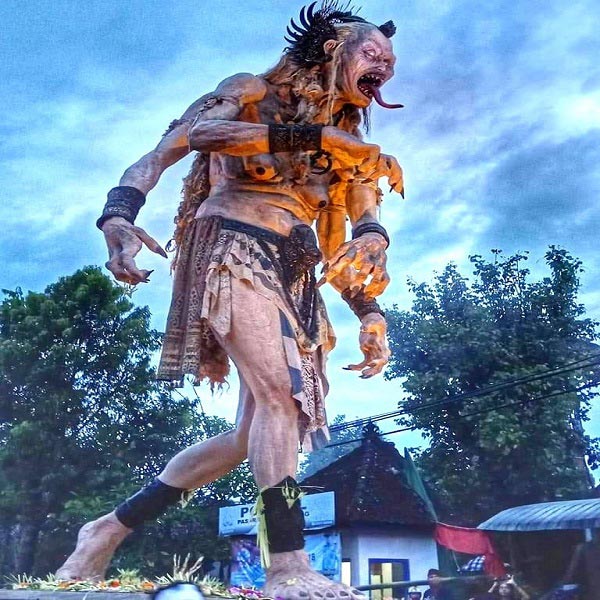 Ogoh ogoh is a kind of statue / giant doll which is made of light materials such as the combination of wood, bamboo, paper, and styrofoam so it is easy to be lifted and paraded. With the development or technology and materials, people prefer using styrofoam because of its lightweight and easiness to be carved and processed, but of course it costs more. Ogoh-ogoh is made in form of Bhuta Kala or evil spirits and creatures who like to disturb human’s life. Bhuta Kala is usually symbolized as a giant creature / Rakshasa with scary and ferocious appearance. Bhuta Kala is the kind of evil creatures which possessed bad nature in them. In Hindu and Buddha mythology, it is said that the word “rakshasa” means “cruelty”, which is the opposite of the word “raksha” which means “tranquility”. By parading ogoh-ogoh and in the end burn or destroy it, it is expected that those vices could be kept away from human race.

Besides taking Rakshasa form, ogoh ogoh is also often symbolized in other forms such as mythological creature like Garuda, dragon, etcetera, and forms of God and Goddess like God Siwa, Ganesha, or Durgha. Nowadays, there are even ogoh ogoh portraying famous people, celebrities, or villains. Despite of entertaining, actually this thing is a bit deviated from the concept of ogoh ogoh which should show mythological evil creatures.

However, some artists who created this kind of ogoh-ogoh argued that now people also have dominated by evil spirit and have done so many bad things such as terrorist or corruptor. They think that those vices must also be destroyed and kept away from human.

The History of Ogoh ogoh

The name ogoh ogoh is taken from Balinese “ogah-ogah” which means something which is shaken. In fact, when ogoh-ogoh is paraded around it is always shaken by the carriers of ogoh ogoh to make it looks like moving or dancing. Besides that, the pose of one ogoh-ogoh to the others is different and various, so each will have different moves when it is shaken. Even, now with the development of technology, many ogoh-ogoh can be moved assisted by machine or other tools.

There are so many version of ogoh ogoh history in Bali. Some people argued that ogoh-ogoh have been known since the era of Dalem Balingkang (ancient Balinese kingdom). At that time, ogoh-ogoh is used in the procession of Pitra Yadnya or so called Ngaben. There is also another argument stated that the existence of ogoh-ogoh is inspired by the tradition Ngusaba Ndong-Nding from Selat Village, Karangasem which also used a similar figure to repel evil spirit.

Another statement is that Barong Landung is the one inspired the creation of ogoh ogoh. Barong Landung is a kind of giant barong which is a manifestation of a scary ancient king and queen named Raden Datonta and Sri Dewi Baduga. However, the most certain fact is that ogoh-ogoh was started to be named “ogoh-ogoh” since 1980’s. At that time, it was also the first time Nyepi included in the list of national holiday. Then, Balinese started to create the figure of onggokan which was called ogoh-ogoh in some part of Denpasar. After that, this culture spread wider into all Bali and then also firstly involved in the parade of Pesta Kesenian Bali XII (Balinese Art Festival XII).

Usually, before the Pengrupukan night, an ogoh-ogoh festival will be held in Puputan Park Denpasar. Ogoh-ogoh which could enter into this event are selected from some region of Denpasar. This event is hold to honor and appreciate the creation of ogoh-ogoh which possesses high art and theme value. Ogoh ogoh which are entered this festival are not haphazardly taken, because they have been undergone a selection process. These ogoh-ogoh must have high value of art, theme, and entertainment.

The theme which is usually used is around the story of Wayang (Ramayana or Mahabaratha) of other Hindu stories. Besides that, when they arrive in the area of Catur Muka Crossroad Puputan, the lifters and their crews must show a dance show or attraction which tell the story or theme of their ogoh ogoh in front of the judges.

Ogoh ogoh festival in Puputan is usually held a few hours before Sandi Kala or evening. After the festival overs, Pengrupukan night is continued with ogoh ogoh parade from villages or banjar around the area of Denpasar. In other regencies beside Denpasar like Gianyar, Tabanan, or Buleleng, ogoh ogoh festival is also periodically held. However, sometimes the festival is not done in Pengrupukan, but in particular events such as Town Anniversary, and so on.